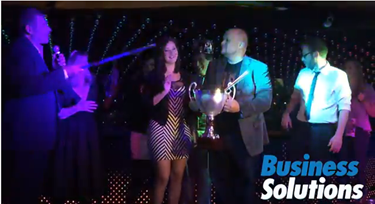 Ever since I attended my first ASCII Cup ceremony, I had difficulty articulating the incredible energy and pomp-and-circumstance around the award. Typically when an IT vendor is presented a channel award, they receive polite applause and a plaque or crystal trophy of some sort.

But the vendor who claims the ASCII Cup gets way more — flashing lights, loud rock music, high fives, and a giant chalice filled with adult beverages from which many in the raucous crowd drink from the rest of the evening. Executives from the winning company get “knighted” on stage by ASCII President Jerry Koutavas, who uses words like “drinketh” and “raiseth.”

The good news for me is that I don’t need to try to explain the ceremony any more. All I have to do is point people to this exclusive Business Solutions video of Datto being awarded the 2014 ASCII Cup during the October 23 ceremony at the Dusk night club in Atlantic City. Claiming the prize for Datto are Vice President of Business Development Rob Rae, Channel Engagement Manager Samantha Ciaccia, and Manager of Partner Development Christine Gassman.

At each of this year’s eight ASCII Success Summits, members of the solutions provider community attending the event voted for vendors in different categories. At the conclusion of the final event of the year, the vendor who received the highest combined scores for all the conferences wins the ASCII Cup.

The ASCII Success Summit – Atlantic City was held October 22-23 at the Bally’s Atlantic City Hotel and Casino in New Jersey. It was the last of eight solution provider-focused conferences ASCII hosted in 2014. For more information on ASCII, go to www.BSMinfo.com/go/InsideASCII.