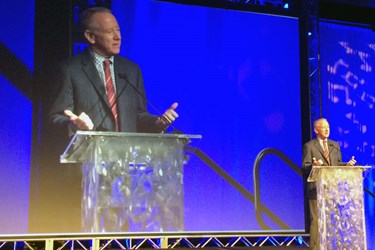 Archie Manning is best known for his football prowess and the success of his NFL quarterback sons Peyton and Eli. But he proved today during his keynote speech at VARTECH 2014, the annual conference hosted by value-added distributor BlueStar, he knows something about teamwork and leading an organization. Manning spoke to an estimated crowd of more than 1,000 channel executives Friday morning at the Hyatt Regency in New Orleans.

Manning offered several insights and memorable quotes during his presentation. His first stories were about two of his New Orleans Saints coaches, Hank Stram and Bum Phillips. Manning learned to adjust to playing for several different personalities and how to handle defeat.

VARTECH 2014 is being held Sept. 18-20 in New Orleans at the Hyatt Regency and the Superdome. VARTECH, the annual conference for value-added distributor BlueStar partners, focuses on data collection, point of sale, mobility, digital signage, RFID, and security. For more information on BlueStar and VARTECH, go to www.BSMinfo.com/solution/InsideBlueStar.