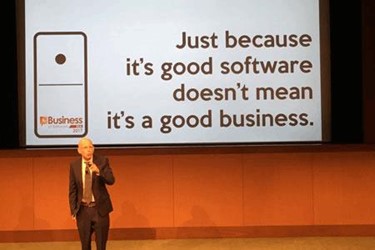 Speaker and author Seth Godin is the author of 18 books, including Tribes, which was on the Amazon, New York Times, BusinessWeek and Wall Street Journal bestseller lists. To his raving fans, Godin needs no introduction. To the average software developer who doesn’t religiously read his blog, one of the most popular in the world, it’s important to understand the marketing guru knows the ins and outs of software businesses. Godin has spent more than 30 years developing, marketing, and selling software. His first job out of college was as a brand manager at an education software company. He was then an independent developer before founding a commercial email software company that eventually sold to Yahoo! (where Godin was VP of Direct Marketing for a short time).

Godin spoke at the Business of Software conference in September 2017 for nearly two hours. He spent the first half of his presentation sharing insights from three decades in the software businesses, and the second half was spent fielding audience questions about software marketing best practices. Here are some of the best quotes and takeaways from Godin’s session: