While POS VAR Cash Register Sales & Service (CRSS) isn’t bullish about selling cloud-based SaaS (Software as a Service) just yet, the company is decidedly bullish on solving unique challenges for unique customers. So, when a 150-year-old baseball stadium called on CRSS to upgrade its wireless network and payment processing systems to support concessions, the VAR was open to plying uncharted waters if it made the best sense for the client. Those waters included partnering with Sterling Payment Technologies and CRS Inc. to include the Samsung cash register product to enable fast concession sales and credit card acceptance. The agreement would mark CRSS’ first foray into cloud-based software offered in a monthly subscription sales model. 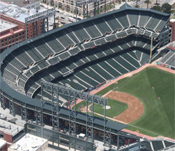 “You can’t drill holes and run cables in a 150-year-old ballpark,” explains Susan Tutt, owner and co-founder of CRSS. “The payment processing system at the park had to be wireless and PCI compliant, and Sterling has expertise on both of these fronts,” she says. While traditional software license sales have been the mainstay at CRSS for all of its 36 years in business, Tutt is impressed with the cloud offering she’s seeing from Sterling. “With Sterling, the client has access to cloud-based transaction reporting that can be consolidated across all concessions, or broken out by individual POS stations,” she says. “This gives them instant and real-time insight into sales and inventory data that helps them run their business.” As a result of its initial success, CRSS anticipates more cloud-based payment system sales in the near future. “We’re working with Sterling on similar projects with other ball parks and a race track/ casino, where wireless is a necessity and moving the IT infrastructure into the cloud makes sense due to physical space constraints,” she says.

Tutt says careful selection of payment processing partners is also increasingly important as compliance pressure mounts, specifically around EMV (Europay, MasterCard, and Visa) and PCI (payment card industry) mandates. “We’re concerned about payment security, and so are our customers. We’ll only sell certified, PCI-compliant hardware and software products,” says Tutt. “As it becomes more incumbent on retailers to ensure they run compliant systems or run the risk of not being able to accept card payments, we depend on our payments vendors for guidance.” 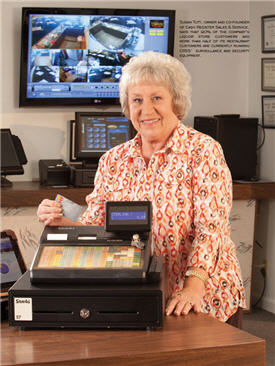 Don’t try telling Susan Tutt, owner and co-founder of family-run Cash Register Sales & Service (CRSS), that her company is doomed if it doesn’t start selling tablet-based POS. And don’t you dare go placing a dire prognosis on CRSS’ life if it doesn’t immediately move all its applications to the cloud. Tutt knows better.

The steady course she and her tight-knit company are on — the course that’s contributed to 25% growth year after year — is plotted by close attention to customer demand. Tutt acknowledges that mobile, cloud-based retail systems are most likely in the cards, but they simply aren’t yet in high enough demand to force wholesale changes on her company’s sales and delivery model.

A Focus on POS Systems, Support
Asked about the market hype around tablet-based POS applications, Tutt says the frenzy for cheap, mobile POS has only helped CRSS solidify customer relationships and sell more hardware and services. “Tablet-based POS is new, and while there are a few good solutions out there, most aren’t ready for the rigors of retail and hospitality environments. We’ve already replaced quite a few of them with fixed POS systems,” she says. “We’ve gained several customers who tried to run do-it-yourself tablet-based POS, only to find that they couldn’t integrate them with their receipt and kitchen printers, or couldn’t get them to accept various forms of payment cards.”

That being said, Tutt admits that the challenge many veteran VARs have faced since the dawn of the Internet is only exacerbated by the craze for inexpensive, tablet-based POS. Tutt says online hardware pricing, whether for mobile or fixed POS terminals, is both a curse and blessing. “We face price objections because merchants can go online and buy hardware that’s much cheaper than ours, but many of our customers learned the hard way that installing, supporting, and servicing those units costs a lot more money and results in a lot more downtime in the long run,” she says. In turn, some of CRSS’ best customers are those whom the company has rescued from self-inflicted POS system debacles. Tutt and her sales team are quick to leverage those merchants as references when faced with the threat of cut-rate online competition.

The as-a-Service business model is another trend CRSS has neither written off nor been forced to embrace. While many VARs feel market and vendor pressure to move toward the model, CRSS remains — for the time being — committed to a more traditional route. “We collect a 50% down payment when we contract a system, 25% when it’s delivered to our location, and 25% when it’s installed,” says Tutt. “Our package pricing includes a set number of hours of programming, installation, support, and training for an initial 90-day period.” After that, CRSS customers can purchase extended service contracts that include a set number of support hours that can be applied to the integration of new hardware or implementation of new modules in the Keystroke (retail) and MicroSale (hospitality) software systems the VAR sells. “When we make an initial software license sale, many customers don’t turn on all of the modules they have available to them. If they choose to leverage the inventory, online ordering, or credit card processing modules at a later date, for instance, they can purchase a block of time to support implementation of and training on those modules,” explains Tutt. She says the company is currently engaged in a dedicated effort to increase sales of extended service and support contracts. To date, the only cloud-based subscription offering CRSS sells is a credit card processing application through Sterling Payment (see sidebar on this page).

CRSS Finds A Winner In DVR/Camera Sales
One of CRSS’ greatest competitive differentiators is its surveillance offering, which integrates directly with its POS systems. True to its cautious, demand-based growth philosophy, the company began selling surveillance in 2006, when small retailers were on the cusp of a major migration from legacy VCR-based surveillance cameras to POS-integrated DVRs. Today, that cautious foray into security systems has blossomed into a booming business. An astounding 90% of the company’s liquor store customers and more than half of its restaurant customers are currently running CRSS’ surveillance and security equipment.

“Most of our customers already had legacy surveillance equipment, but they couldn’t do much with it. When we demonstrate the features of the security system we sell, business owners want it as soon as possible,” says Tutt. Those features include smart searches on time-stamped integration with POS transactions — which allow users to quickly call up video footage of specific transactions and review them frame-byframe — and an interface that allows users to circle an area in the camera’s view (e.g. back entrances, secured areas, highvalue merchandise) and search for motion in that specific area. Access to real-time and stored footage is also available to users remotely via the Internet and through a mobile device application. “We have local business owners who live in far away states, and they use the application to monitor sales activity and operations remotely,” says Tutt. 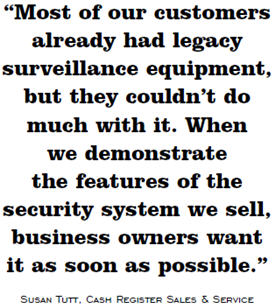 While she says loss prevention is the primary application for the surveillance system CRSS sells, Tutt says mitigation of liability is a growing concern. “Several customers have used the system to confirm and prosecute dishonest employees and shoplifters, as well as to refute slip-and-fall claims,” she says. The security offering has also opened up new markets for CRSS, including car dealerships, gas stations, and even private residences. Its largest surveillance implementation is at an amusement park, where more than 100 cameras are installed to monitor not only concession areas but also roller coasters and waterslides as well.

Investment In Custom Gift/Loyalty Cards Pays Off
While the software systems CRSS sells have integrated gift and loyalty programs, the VAR used to have to outsource production of the cards to a third party provider. Recognizing a new business opportunity in the growing demand for gift and loyalty cards for small merchants, CRSS invested in a card printer that allows it to create and encode custombranded cards in virtually any quantity. “We don’t require a minimum order, which differentiates us from the major card manufacturers and is appealing to small merchants,” says Tutt. While the printer and consumables constituted a significant investment for the small company, she says the solution was turning a profit within its first year. Tutt says the card offering has become a sales leader, and CRSS is now manufacturing cards for several small businesses all over the country.

Tutt says the value of her company’s surveillance and card offerings can’t be overstated. “Most of our immediate competitors don’t offer these things, making them important competitive differentiators,” she says.

CRSS also maintains a fully functional demonstration lab at its home office, which Tutt calls a strategic tool in its sales approach. “We make it a point to get prospects into our office to see these integrated solutions on display. We have a virtual store environment here, where we can demonstrate the integration of our touch screen-based POS systems with surveillance, gift card, and payment applications in a real-world environment. That helps our sales conversion rate immensely.”

Standardization, Exclusivity Key to Sales and Services
CRSS avoids the price pressure from Internet-based competition by offering standardized and exclusive solutions that can’t be purchased online. “With commodity hardware, merchants can almost always find something cheaper online. We won’t resell a vendor’s product if they offer it through generic online wholesalers,” she says. This eliminates some degree of the price pressure felt by many resellers. “We take great care to work with vendor partners that adhere to rules set up to prohibit dealers from publishing and selling products online at lower than retail prices,” says Tutt. “If you can buy a vendor’s product anywhere, we’ll choose not to represent that vendor.”

By standardizing its solution set as much as possible, CRSS also improves support levels and protects its margins on support services. “Many of our customers are open 24/7. If they have an equipment problem, it needs to be addressed right away to avoid downtime. By standardizing the solutions we sell, we can have backup systems on the shelf that are ready to deliver and plug in immediately,” says Tutt.

To some of the retail systems VARs and integrators showcased in Business Solutions magazine, the business model at CRSS might seem old-fashioned. The company hasn’t risked a reputation built on nearly four decades of experience by jumping headlong into cloud services. It’s not clamoring to sell tablet-based POS to customers who aren’t asking for it. Instead, it’s following customer demand for proven, integrated retail systems and support services, and it’s steadily building profit along the way. While some technology trends will come and go, double-digit business growth never goes out of style.