Retail VARs: How Did It Come To This?

Past events, actions, and inactions have led retail VARs to a key turning point. Whether the story ends in ruin or prosperity is for each VAR to decide.

Let’s set the stage. Payment processing companies have entered the POS world, bringing low-priced hardware and software alternatives that threaten to replace the traditional POS systems you’ve sold for years. Some actually approached POS dealers with their offerings first, and when they didn’t get the traction they needed, they brought in independent merchant processing agents. Many of those agents are now happily selling POS, effectively doubling, tripling, or more the number of competitors you have.

Additionally, the desires of retailers have changed. Whether they really need tablet-based POS solutions or not, they want them. Enter a deluge of uber-affordable, easy-to-install, sold-direct tablet-based POS apps. In both cases, your customers now have low-priced alternatives that, if you offered them, would put you out of business. Cue dramatic crash of thunder.

In light of everything above that’s already happened, it’s not productive to sit back and wonder how things came to this. It also isn’t productive to ignore the situation or fight against the trends. It’s too late. You can’t unring this bell. Rather, you need to be spending considerable time evaluating yourself and your business and determining what steps you need to take to survive.

I use events like RSPA Inspire to help gain insight into the POS community and where things are heading. At the most recent Inspire, in early 2013, the future direction became clear to me. Sitting in a room surrounded by the most successful and forward-thinking dealers and vendors, the “as a Service” model was the hottest topic and was agreed upon as the future model of the channel.

The Many Benefits Of The “as a Service” Model
This model has some key benefits. First, it lowers the initial cost of a solution for your customers, making purchases more palatable and closer to what they’re seeing from these new competitors. This makes purchases an operational expense rather than a capital expense. Second, you get stable, recurring revenue. Rather than ride the wave of sales throughout the year, you get a predictable stream of revenue.

Take a look at the following example that came out of Inspire keynote speaker Tom Bouwer’s presentation on this model: 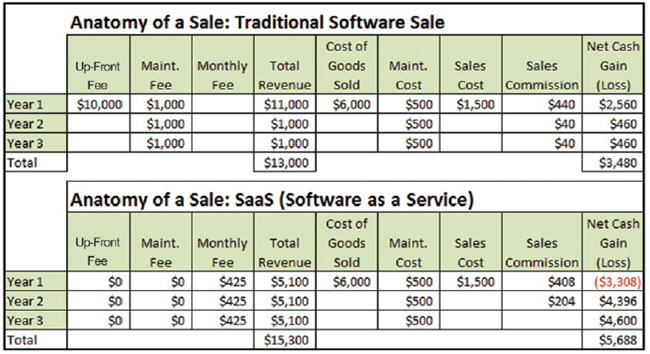 Here’s what you’re looking at. Both charts depict a $10,000 sale. The cost of goods sold is $6,000. In the top example, after you pay out the commission and take out some other costs, the sale nets you $2,560 immediately. In the next two years, you’ll get some additional revenue from maintenance. After it’s all said and done, after three years, that $10,000 sale yielded $3,480.

In the bottom example, which is an “as a Service” model, that same $10,000 deal is on a $425/year plan. All the other costs still exist, and the net result at the end of year one is a loss of $3,308. Hang in here with me. Look what happens in year two. You make a portion of that money back due to that recurring $425. By the time year three ends, rather than netting $3,480, you’d make $5,688 on the subscription model. It should also be noted that with this model the cost of goods sold is actually a little misleading in that you own the goods. There’s still the out-of-pocket to you, but you now have an asset.

Bouwer shared another set of charts which illustrated the difference in revenue over three years using many customers. I won’t share the images here with you, but I will share the punchline of his example of a fictitious business: Starting with 12 new customers in year one and ending with 72 total customers in year three, the “as a Service” model brings in about $410,000, while the traditional model yields a paltry $251,000. Same hardware, software, and services, just bundled and sold differently. Now, it isn’t realistic to think that you can snap your fingers and make this leap, but you need to realize how much money you are leaving on the table.

The third benefit of this model is that your relationship becomes stickier. As you’ll learn, the “as a Service” model doesn’t and shouldn’t end with a POS bundle. You’ll want to create add-on services for things like networking security, backup and recovery, digital signage content creation and delivery, and so on. This is something managed services providers (MSPs) in the traditional networking space do very well. Indeed, most are always looking for that next service to offer their customers. With the addition of each service, you become more difficult to replace (and make more money).

Finally, the value of your business increases for when it’s time to sell the business and retire. In all honesty, as a break-fix business with little to no recurring revenue, chances are your business isn’t worth a fraction of what you think you deserve for all the years of painstaking work. I’ve talked with lots of dealers who are learning this the hard way. Changing to a recurring revenue model is your key to getting the most for your business when you walk away.

Hard Decisions Might Be In Your Future
Understand, this model isn’t without challenges. Customers might not want a monthly payment. You might not be able to afford to give your customers such payment terms (as you might guess, cash flow is a huge hurdle to overcome). And, quite realistically, the composition of your company might have to change.

In the July issue of Business Solutions, I spoke with Jim Stewart of Advanced Data Systems. Stewart made the switch to a recurring revenue model in almost everything his company offers. To make it happen, he found himself dramatically reducing expenses and hiring a salesperson who could talk this new talk. He also became willing to vastly expand his product line to all things retail IT. Within a couple years’ time, Stewart’s entire business looks totally different. However, he also now has a very profitable business with a stable revenue stream, something his company lacked for a long time.

Stewart made the switch because he had to, and if you’re not feeling similar pressure to change yet, rest assured it’s just around the corner. The commoditization of POS has already occurred. Sure, there will always be some customers that have a need for robust systems, but those will be few and far between.

According to Lynn Skurla of Skurla’s POS Solutions, “Many customers don’t want complex systems of the past. They don’t use 90% of the capabilities of traditional POS systems. The 10% they do use is what’s showing up in these new apps.”

If the old systems of the past aren’t needed, what about all your technicians? Can your existing salespeople sell these new solutions? Can they adequately convince customers to switch to a subscription model? Hard questions indeed.

Then there’s the question of whether you’re financially healthy enough to pull off this transition. In speaking with Hunter Allen, CEO of Cervion Systems, a retail solutions provider built entirely on the “as a service” model, he stressed how important it is for resellers undertaking this model to have their books in order. That is, make sure you have true financial statements and understand the cash flow aspects of your business. “If you are struggling to pay bills, meet payroll, etc., then financing a transition to an ‘as a Service’ model will require external resources,” he says. Start by talking with your payment processing partners, some of which have programs in place to help fund such purchases. Also, have the conversation with your hardware and software vendors to see what options they might be able to offer. “Depending on your internal accounting resources [or lack thereof], it may be valuable to engage an external CPA or financial advisor,” Allen continues.

Difficult decisions are probably ahead, but so too are better times if you’re willing to take the necessary steps. The following pages of this guide were put together to get you started. Understand that they’re just the beginning of a long journey that will require patience, hard work, and outside-the-box thinking.

Which brings me to my final point. Don’t even bother turning the page if you still think you can salvage your old business model. Don’t turn the page if you still think you can retire selling POS systems alone. As today’s POS dealer, you need to be willing to make giant leaps to become tomorrow’s forward-thinking retail IT provider. If you’re ready to take your first steps to an exciting future that blows the concept of a traditional POS dealer out of the water, turn the page.