This seasoned software executive is getting his text-to-order startup off the ground by being smart about bootstrapping, pricing, and beta customers.

By the time Rich Rotbard successfully exited from a point of sale software company in 2015, he already had a few ideas floating around in his mind about what he’d do next. It was only serendipitous when Scott Saltiel approached him with an idea similar to one on his list. Saltiel’s friend, Nish Kamboj, was considering developing an online ordering system, and they wanted Rotbard’s opinion, since he had so much experience in restaurant tech. The three set up a brainstorming session to compare notes. What was supposed to be a brief meeting in 2017 turned into hours of excited discussions about what a potential application would look like. Fast-forward two years: The three cofounders officially launched SOOP, a text-to-order application for restaurants.

Why the name SOOP? Technically, it stands for “Simplified Online Ordering Platform.” That phrase headlined the concept document the three co-founders initially put together. When that got too cumbersome to spell out throughout the document, they abbreviated it and started using the acronym during discussions. Every time they’d meet, they’d ask “What should we call SOOP?” Eventually, the name stuck. The name might have come naturally, but that’s about the only part of getting a software startup off the ground that is simple. Rotbard explains how deciding to bootstrap, acquiring beta customers, and determining pricing are just as complex as the technology behind SOOP.

THE SILVER LINING OF BOOTSTRAPPING

SOOP’s cofounders spent the better part of a year brainstorming and laying out a business model before the first line of code was written. The luxury of being methodical in the planning phase was afforded by SOOP’s being entirely self-funded.

Rotbard spent 20+ years at pcAmerica, a family- owned, organically grown bootstrapped software company. He had been leading the way as president and an owner in the 11 years leading up its sale, but he also spent time in marketing, sales, and technical services roles. Being in a variety of seats allowed him to see firsthand that it was possible to build a successful company without relying on outside investors. “All of us agreed that we should at least give it a shot and see whether we can do it without raising money,” he says. “But I don’t know that I would ever turn down a conversation about outside funding.”

Self-funding meant SOOP had to build a minimally viable product in the true sense of the term: Only the most essential features were developed to get the app ready to go. SOOP has an intentionally specific, simple function: to relay an order from a customer’s text message to the restaurant. It’s not a fullscale online ordering platform or a robust point of sale solution (at least not yet). Cash-heavy companies can be tempted to throw every possible feature into a solution, thereby complicating the product and extending the development time. That’s just not the case with SOOP. “I learned early on that you have to get a product out there,” Rotbard says. “You can come up with a million features, and if you try to get all million features in there in one shot, you’ll never get the product out.”

There’s a silver lining to the lean functionality of a bootstrapped software environment: SOOP is not a support-intensive company. Actually, the simplicity of the product is a key selling point. “The average customer in a point of sale company probably will call you 10 times with support calls, mostly with howto questions or problems that need resolved,” Rotbard explains. “But so far we’ve gotten very few support calls from any of the beta sites, which tells me that people are able to use the system and hit the ground running.”

SOOP didn’t just get lucky with its beta customers. Rotbard explains the specific criteria used to choose those beta sites. First, the restaurant had to be local so the team could have easy access to troubleshoot any issues. The locality would also simulate the network effect of SOOP — that an end-user customer ordering from one local restaurant is likely a customer of another restaurant down the street. So, once customers’ customers are up and running on SOOP, they would be able to send orders to a few restaurants. Second, the restaurant had to be popular — ones with phones ringing off the hook taking orders. SOOP also chose a variety of customers — a Chinese restaurant, an Italian restaurant, and a bagel place, for example — to test the different types of orders that could be placed.

A key selling point to these beta customers was SOOP’s flat pricing model. Rotbard knows SOOP does not want to compete with the likes of Grubhub or DoorDash. While those ordering platforms come with the benefits of wide, established networks of users, they also take up to a 30 percent cut of every order placed. The more orders placed, the higher the bill is for a small restaurant. In an industry with already razor-thin margins, the unpredictability of per-order pricing causes headaches for restaurant owners. Rotbard knows there are restaurant owners who say, “I have an online ordering system, but I don’t want customers using it, because I don’t want to spend the money on it.” SOOP’s fixed pricing will encourage restaurants to use the platform, since the software will actually be cheaper as the number of orders placed increases. 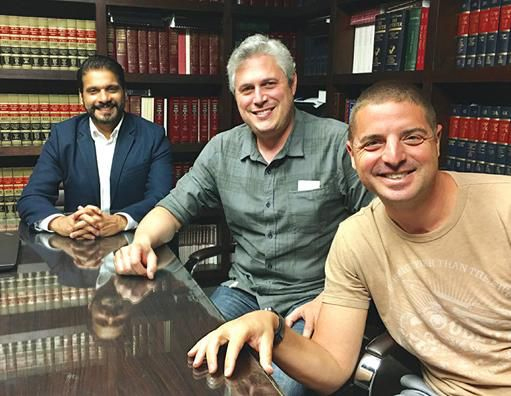 While this pricing model is a win for customers, it also means SOOP will have its own variable costs to consider when determining that flat monthly fee. As adoption grows, so will the cost of the infrastructure to handle the text messages. Rotbard also needs to make sure there is enough cash left over to appropriately compensate the resellers that will help SOOP scale. The beta customers aren’t just helping fix the few early bugs, but they are also key to helping SOOP calculate and refine its pricing.

WHAT’S NEXT FOR SOOP

Rotbard envisions resellers being essential to SOOP’s growth. Just as the software’s functionality is intentionally simple, the same is true for how resellers will work with SOOP. From onboarding, to billing, to commission structures, Rotbard wants to make it as easy as possible for resellers to earn supplemental income from SOOP.

From a technology standpoint, SOOP’s roadmap has plenty of exciting detours from its current text-to-order offering. A payments engine is around the corner, so that SOOP will work just like Uber, where a customer doesn’t have to pull out a credit card to complete an order. What really has Rotbard excited are the endless possibilities artificial intelligence can bring to SOOP’s future customers. “We had to build in a lot of checks and if-then statements just to get SOOP ready to write up orders,” Rotbard explains. “At some point, we want SOOP to really understand plain English. We want this to be a one-stop place where you can speak to SOOP, get restaurant ideas, make reservations, dictate orders, pay and order at the table, and have food delivered.”