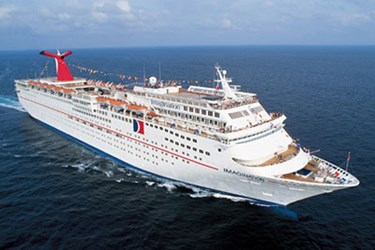 About a year ago when I first heard that VARTECH, BlueStar’s annual conference, would be held on a cruise ship, I thought it was a ruse. There couldn’t possibly be a floating trade show, right? You couldn’t actually coordinate nearly 1,400 attendees throughout North and Latin America, along with exhibitor hardware, and get everything and everyone onto one boat, right?

I’m writing this article from my room on the port side (or is it the starboard side?) of the 855-foot long, 70,000-ton Carnival Imagination somewhere in the Atlantic Ocean between Miami and Nassau, The Bahamas.

I’m struggling to accurately capture the essence of this obviously atypical trade show. We’ll post video of the show floor soon on www.BSMinfo.com/InsideBlueStar; in the meantime, here are some observations that might articulate what I’m seeing:

BlueStar CEO/President Steve Cuntz isn’t claiming credit for what has proven to be a well-received idea of attempting a floating trade show. “When Mark Fraker (BlueStar VP of Marketing) suggested we have VARTECH on cruise ship, I said, ‘We will never, ever have VARTECH on a cruise ship,” a beaming Cuntz told me. “And here we are today.”

For more information on BlueStar and VARTECH 2012, go to www.BSMinfo.com/InsideBlueStar