In 18 years of delivering point of sale (POS) systems around the Caribbean, Kevin Raymond never expected to install one in an ice bar. But that is exactly what happened when one of the newest tourist attractions in St. Thomas, U.S. Virgin Islands, hired Raymond to install a touch screen POS solution. “We don’t get ice bars in the tropics, so I reacted like everyone else around here when I heard about it: Is it for real?” Raymond says, “This a first, for sure.”

Raymond, owner of POS solutions provider Impulse Consultants, says the client originally asked him to install two POS terminals at the Magic Ice Gallery, a combination ice sculpture museum and bar complete with a souvenir shop. One terminal would go into the souvenir shop and the other would be at a ticket counter in the lobby.

There was no plan to place a terminal in the ice bar because electronic equipment, unless designed to do so, does not operate in freezing conditions. Temperatures at the Magic Ice Gallery bar, built with Arctic ice imported from Norway, usually hover at the 26˚F mark, considerably below the 80˚F temperatures that draw vacationers to St. Thomas.

A Terminal For Extreme Conditions
After visiting the site to scope the project, however, Raymond decided to do some research. Wouldn’t it be nice, he wondered, to put a terminal in the ice bar so bartenders wouldn’t have to leave the bar to use a cash register? While researching options, he came across a Gladius Smart touch screen terminal from his preferred hardware vendor, FEC, featuring an LED (light-emitting diode) display. It was the only one Raymond could find that didn’t have an LCD (liquid crystal display) screen, he says.

LED displays use a semiconductor light source that resists freezing temperatures, whereas the crystals in LCD screens tend to freeze in low temperatures. Once Raymond discovered the LED option, he informed the client about the possibility of installing a POS terminal in the bar, where patrons wear parkas and sit on carved ice stools. “The customer loved the idea,” Raymond says. “They love the product and they love that it actually works.”

Once he got the green light from the client, Raymond ordered the equipment from FEC and got ready for deployment. Though Impulse Consultants employs a total of four people, the Magic Ice Gallery was a oneperson job handled by Raymond himself. Because each terminal would handle different retail functions, each configuration was different, with touch screen buttons specific to the bar, the ticket counter, and the souvenir shop. Raymond chose Restaurant Manager from Action Systems for the configuration.

As for hardware, Raymond picked the Gladius Smart terminals because he had worked with them before. The terminals are Windows-based, all-in-one machines with card readers, customer and counter clerk displays, and connections to receipt printers and cash drawers. Each machine is connected to an SNBC printer and FEC cash drawer. 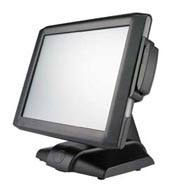 It took Impulse Consultants two weeks to configure and deploy the POS solution, just in time for the venue’s grand opening on Jan. 10, 2012. Raymond says he has spent about eight hours training the staff, and figures it will take about five more to get everyone up to speed on the system. In total, 15 people will use the solution, including a half-dozen bartenders.

In addition, Raymond believes that about a third of his customers, when it comes time to replace their terminals, can benefit from LED displays. LED screens are brighter and easier to see in sunlight. As such, Raymond says they are preferable for outdoor bars, retail shops, and eateries, which are common in the Caribbean islands.

LED machines cost only about $150 more than LCD-equipped ones, so Raymond says he is confident price will not be an issue. “You are getting a much brighter display for what, when you consider a project’s total cost, isn’t that much more money at all.”