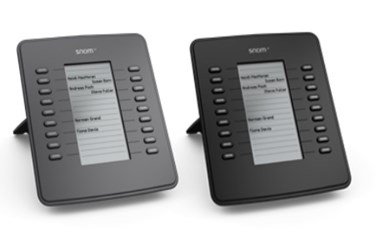 snom technology, a leading developer of IP desktop business phones, has extended the capability of its 7xx series IP phones with the D7 Expansion Module.

The modern module is geared toward executive assistants, call centers and other call-intensive environments where users are responsible for managing and monitoring large call volumes.

The D7 is simple to set up and use. It is powered by the host phone via USB and does not require any extra cabling, IP addresses or administrative management. Users simply plug the D7 into the host phone, and start assigning functions to the keys. Users can daisy chain three D7 modules together for a total of 54 functions. The high-resolution display provides a perfect visual interface, which can be easily configured and labeled via the phone’s web interface or directly on the phone itself.

Further, the buttons on the D7 are digitally labeled, making for a cleaner, ultramodern design for users.

“This is a very simple device that delivers major capabilities that improve productivity and efficiency,” said Tommy Lee, snom’s Director of Partner Alliance. “It’s an absolute necessity for those managing a large number of calls and need to avoid bottlenecks.”

The D7, which works with snom’s UC edition Lync qualified phones as well as SIP-based phones, comes in black and grey and is available now for an MSRP of $139. The module will also work seamlessly with forthcoming IP handsets from snom in early 2015.

About snom technology AG
Founded in 1996, snom develops and manufactures VoIP telephones and related equipment based on the IETF open standard, SIP (Session Initiation Protocol). Recognized for its high-quality, customizable and cost-effective business phones, snom is also differentiated by the company’s history in the VoIP industry and its dedication to high security standards. All of snom’s products are designed to be fully interoperable with leading communications equipment vendors. snom customers and partners benefit from the interoperability and flexibility that snom telephones offer, including plug-and-play integration and universal compatibility with standards-based SIP VoIP platforms, applications or services. In September 2011, the snom 300 and snom 821 became the first and only SIP phones to achieve “Qualified for Microsoft Lync” status – Microsoft’s top distinction for fully tested interoperability and compatibility with Microsoft Lync. snom’s leadership continues today, based on its six-phone UC edition portfolio – the industry’s largest and most extensive family of standards-based business phones qualified for Microsoft Lync enterprise environments.

snom is headquartered in Berlin, Germany, with offices in Italy, France, the United Kingdom, Taiwan and the U.S. that support a global network of channel partners in Europe, the Americas and Asia Pacific. For more information, visit www.snom.com.