Robots Aren't Stealing Our Jobs — They're Helping Us Do Them 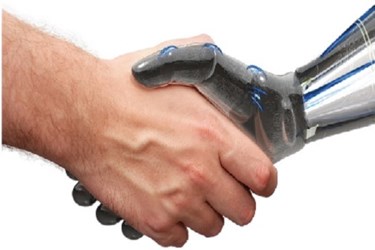 Forbes magazine recently interviewed the futurist Gerd Leonhard about his new book, Technology vs Humanity. It’s an eye-catching title complemented by an equally attention-grabbing sub-heading, The coming clash between man and machine, but its oppositional tone encapsulates a fairly limited view of what augmented and artificial intelligence means for humanity.

There’s nothing new in the belief that advancing technology is a threat to humankind — such fears are at least as old as the time of the Luddites in early 19thcentury Britain — but it’s a viewpoint that seems to be enjoying something of a resurgence.

When Google’s AlphaGo program sealed a 4-1 victory over the 18-time world Go champion Lee Sedol in March this year, it was interpreted by some as yet further evidence that the robots are taking over, and they’re coming for our jobs. Similar views were expressed almost 10 years prior, when chess grandmaster Garry Kasparov lost a chess match against IBM’s supercomputer Deep Blue.

The comparison isn’t perfect; Deep Blue relied on brute computational force, whereas AlphaGo also made use of neural networks and reinforcement learning in a way that is more similar to human decision-making. But Kasparov’s reaction to his defeat is relevant today.

While some were unsettled by his loss, Kasparov simply recognized it marked a new approach to how chess could be played — one in which computer power was used to enhance human intelligence. We were entering the era of augmented intelligence.

This augmented intelligence approach to the game was used in a subsequent match when Vladimir Dobrov, a chess grandmaster, partnered with a computer and lost to two unranked players also supported by a computer. While Dobrov should have been the clear favorite, his defeat was blamed on the fact he relied too heavily on his intuition and didn’t make sufficient use of his computer.

In the business world, this augmented intelligence approach is the only way to sufficiently meet the challenges of an increasingly complicated landscape. And like Dobrov, there’s a danger of not making sufficient use of data-crunching computational power.

There’s no shortage of data. In 2013, IBM released research showing 90 percent of the world’s data had been created in the last two years. However, what is in short supply is the number of people in organizations with the experience and expertise to correctly interpret data and make informed decisions based on it.

This leads to a bottleneck within companies where decisions are being taken too late — the wrong person has been assigned to a project, the wrong project has been prioritized or someone with the wrong skillset has been hired — because a fast-growing company simply can’t train enough people quickly enough so that they have the knowledge to interpret data and act on it. And that hits the bottom line.

Augmented intelligence solutions are increasingly addressing this by steering people who aren’t data experts in the correct direction so they can make decisions with confidence based on data. Data allows the reports to be run, but it is augmented intelligence that shows which data is important and provides expert insights that indicate to people what they should do in a given situation.

Employees need no longer generate huge reports by inputting reams of data but are being guided via software with an inbuilt logic, steering them towards sensible next steps in response to the data they are inputting. Guided analytics and software solutions have shifted how companies can operate.

Couple that with the fact technological developments allow businesses to introduce elements of gamification — creating charts and leaderboards to reward those who are following the best practices that augmented intelligence allows — and it’s clear we are entering a new era of being able to meet increasingly complex business challenges.

Of course, the whole point of augmented intelligence is that it enhances human insight, and we should resist the belief that we can outsource our thinking to robots wholesale.

Instead, we should take our lead from Garry Kasparov, pairing human insight with that of technology.

Anyone who resists the role of augmented intelligence in the business world only need see the profitability gains from data-driven decisions that ensure the right people are taking the right decisions at the right time. At that point, you could say it’s checkmate.