Restaurant And Hospitality IT News For VARs — February 17, 2014 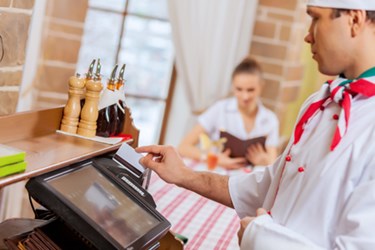 In the news this week, experts say the EMV transition will provide for both chip and PIN and NFC technology. Also, research shows the retail industry is behind in cybersecurity spending, and half of all restaurants are seeking customer-facing technology.

Switch To EMV Includes Both Chip And PIN, NFC

At The Smart Card Alliance 2014 Payments Summit last week, experts discussed the emerging EMV chip and mobile payment technologies in the U.S. As the transition to EMV happens, the U.S. will need to consider the complexity of the U.S. payment system. The switch to EMV will be like “all of Europe deploying EMV at the same time,” one expert said. Card Verification Methods, education, and ATM upgrades were also discussed. In terms of mobile wallet technology, experts haven’t given up on the prospect of NFC-based mobile wallets. As retailers update their POS terminals to accept contact/contactless EMV payments, they will have the capability of accepting NFC-based payments.

The Wall Street Journal features an interview with MasterCard’s Carolyn Balfany about EMV adoption in the U.S. Balfany discusses why it has taken so long to switch to chip and PIN cards and how the change over to the new system will happen. She also discusses the “liability shift,” which will make the party with the lesser technology liable for costs in the incidence of card fraud. She says, overall, this migration is about establishing a technological platform for next generation payments, including contactless payments.

Retail Industry Behind In Security Spending

Reuters reports that retailers are facing increasing pressures to invest in cybersecurity methods. According to IDC Retail Insights, retail technology spending was expected to rise 4 percent annually between 2012 and 2017. However, only 2 percent of retailers’ tech budgets have been spent on security, IDC Retail Insights says. This is expected to change, as IDC expects retailers to increase security spending by 5.7 percent to $720 million in response to recent breaches and other outside pressures.

According to a survey taken by the National Restaurant Association, members of the Millennial Generation say technology makes a difference in their restaurant experience. For 1 in 4 customers with younger children, technology is a key tool to draw them into a specific restaurant. Because of this, the NRA says that half of all restaurants are looking to invest in customer-facing technology in 2014. In particular, investments will go towards social media and electronic marketing. A video of all the findings can be viewed here.

According to QSR Magazine, vending machines that have traditionally sold small snacks and drinks are now branching into the realms of quick serve. From smoothie self-serve machines to cupcake ATM’s, customers have become more interested in convenient ways to get food outside of a store’s regular business hours.

Brick Meets Click discusses the evolution of the HAPIfork, which monitors how quickly a person is eating. It can alert the user when he or she starts to eat too quickly or when he or she is eating at a healthy pace. BMC says that technology like this could serve as a marketing tactic in retailer-sponsored challenges.

Nation’s Restaurant News discusses how social media has helped one social media intelligence firm single out the most popular menu items. The firm uses what is called “deep text analytics” in order to determine whether or not a consumer will return to or recommend a restaurant.