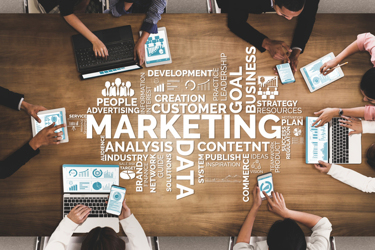 “Understand the buyer’s point of view!”

That’s what marketing teams tell us as they fail to apply it to the single most important part of the buyer’s life – being overwhelmed with marketing.

We live in an age of marketing pollution.

Every startup, particularly in high tech, buys the DiscoverOrg databases, hires a bunch of 23-year-olds, fires up a Marketo-Spam marketing machine, and attacks the market.

Buyers are now over-saturated and everyone knows it. Buyers avoid LinkedIn like the plague – only headhunters, life coaches, franchise sellers, and Aussie sales coaches lurk there.

Executives don’t put their phone numbers on their business cards, at least their direct ones. Trade shows attract low to mid-level people collecting T-shirts and pens.

The response from marketing teams is to double down.

If this doesn’t get through, they need to make it more focused: personalization at scale. Group prospects into smaller groups, then overwhelm them with focused material – they will never read.

Ever look at the email lists for a well-funded startup tech company? We did. We found thousands of names with Hotmail and Gmail accounts, mostly from India. Decision-makers, you think?

What is the cost of this madness?

Marketing, fully loaded, can be 20% to 40% of a high-tech company’s budget. In very over-funded startups, marketing and sales exceed revenue for years.

It is an open secret that nobody wants to talk to a salesperson if they can get their information off the web. Who would? The web is non-intrusive, nobody will hassle you with incessant, inane questions about what keeps you up at night.

The second a buyer interacts with a salesperson; they enter the dreaded “marketing funnel.” That means constant emails, follow-ups, and calls to their cell phone. When they tell the marketers they have no interest, they are only off the hook until a new rep takes over.

A new rep is given all the old “leads” which they then try to reignite some interest – which, by the way, need to be closed this quarter.

Why does this continue?

Marketers cannot do anything else.

There is no Plan B.

They do not know any other way to find buyers other than massive email campaigns, having bus dev reps make cold calls if someone downloads a “white paper” otherwise known as a brochure.

What about a real sales call?

Wow! Like a real appointment, when the sales rep gets through to the potential buyer, and they take a face-to-face meeting?

Those are so rare with a new prospect that the poor rep often has to bring along his boss, maybe a sales engineer, of course, that person’s boss. Never enough chairs in that uncomfortable cubicle.

Marketing innovators are getting to the buyer indirectly, via trusted advisors.

In a recent example for one of our firms, the ultimate buyer is a well-known business figure, with 100% name recognition in the United States and likely the world. He lives in a protective bubble and getting to him with traditional marketing would not even be considered.

Our pals created a series on concentric circles around this famous business leader. They found people with whom he had strong, public relationships. Some were luminaries, some were not.

They were easily able to engage with several people who were a single phone call away.

Our team spent some time with these trusted advisors showing them a CRM technology far ahead of anything from legacy systems like Salesforce. They showed how they could build a multi-billion customer CRM system, from scratch in a month. It ran at silicon speed on hardware you could put on your desk.

No need for Oracle. No massive implementation fees. Costs were a fraction of traditional technology.

Our famous buyer, they knew, was very much in the market for such a system.

During one of the later demos, on Zoom, the trusted advisor took a call from this famous businessman. She put the team on hold while she spoke to him – telling him she was getting a demo of our team’s product which she loved. Said it right on the Zoom call!

Invest some marketing expense in finding that circle of trusted advisors, sell them, and let them sell the person overwhelmed with traditional marketing.

Jay Valentine is the CEO of ContingencySales, an investment company bringing disruptive technologies to market without early venture capital. His commentary is at www.JayValentine.com.