How VARs Can Benefit From EMV Adoption 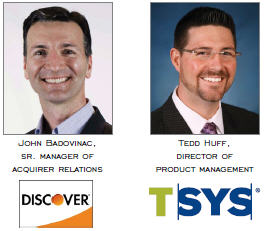 There’s a big opportunity staring you down today if you’re an IT solutions provider with experience in point of sale (POS) technology. Any of your customers that accept credit cards as a payment option are scrambling to prepare their POS systems for a huge impending change in payment security — EMV (Europay, MasterCard, Visa). Most of the world already has made the conversion to EMV, defined by EMVCo.com as a “set of specifications for smart-card payments and acceptance devices, developed to ensure interoperability between chip-based payment cards and terminals.” Most of Europe, Mexico, Brazil, and Japan accept chip and PIN cards today, and another 50 countries are in the midst of migrating, according to the Smart Card Alliance. So while 45% of the payment cards in circulation and 76% of global POS terminals accept EMV payments, the U.S. is still preparing for the switch.

Hurdles To Adoption Of EMV
Despite the fact that international businesses, such as retail or restaurant chains, have already been through the EMV transition, there are several hurdles to U.S. success, explains John Badovinac, senior manager of acquirer relations for Discover. “Confronting reality is one such challenge. We need to understand EMV is coming, and it’s not optional,” he says. That means merchants, the IT channel, and, ultimately, consumers, need to learn what EMV entails and exactly how it impacts them.

“The channel, in particular, needs to learn the requirements and resources available for handling EMV and ways to help customers prepare and succeed with EMV,” adds Badovinac.

Complexity presents the next barrier. Not only will card issuers need to comply by rolling out chipped cards, payment processors need to ensure software and systems handle the new EMV validation process. And VARs must be prepared to guide merchants through the gauntlet of software and hardware hurdles that come with this new system. “It’s not easy turning on acceptance of EMV card transactions,” cautions Tedd Huff, director of product management at TSYS Acquiring Solutions. He explains that while payment processors face the first deadline — they must be capable and certified for EMV domestic transactions in April 2013 — the push for EMV adoption then spreads to merchants, with the incentive of limited liability hitting in October 2015.

Additionally, both Huff and Badovinac say ISVs in the marketplace want to tackle EMV but aren’t necessarily equipped for the transition. In fact, some smaller ISVs may struggle with the transition due to retraining and research and development costs.

Advantages Of EMV Are Worth The Investment
Regardless of hurdles such as education, research and development, and investment in new POS components, most experts agree that the security advantages of EMV will drive adoption. EMV secures the payment transaction with enhanced functionality in three areas — card authentication, which protects against counterfeit cards; cardholder verification, which verifies cardholder identification and protects against lost and stolen cards; and transaction authorization, using issuerdefined rules to authorize transactions. Lastly, it’s virtually impossible to create a counterfeit EMV card, according to EMVCo.com.

As Huff explains, using a technology that provides a higher level of certainty about the identity of the cardholder and consequentially lowers the risk of fraudulent cards should be enough to modify processes up and down the payment chain. “For the merchant, EMV provides a sense of security that the card and the person using it are valid, and with that, their chargeback risks are going to be lessened,” says Huff. 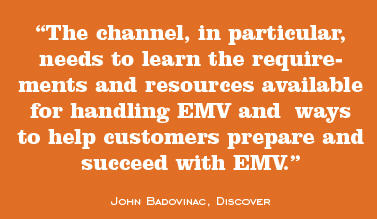 In addition to generally improving security, reduced liability is vital to adoption, adds Badovinac. “Liability for cardholder fraud at the point of sale and loss falls to the least-hardened provider under EMV rules. That means liability is assumed at the step in the chain where there has been the least effort to comply.” For example, if an issuer has gone to the trouble to issue a chip and PIN card, but the merchant hasn’t upgraded its payment system, the liability falls on the merchant. Badovinac says that in Canada, which just adopted EMV, many merchants use EMV compliance as a differentiator — promising safe transactions. “This is a sea change in the level of security around card transactions,” he continues. “When we look at Canada, there was a clear and phenomenal reduction in fraud at the point of sale. It helps make the case here, for certain.”

Channel Essential To Merchants’ EMV Success
Ideally, solutions providers need to evaluate the road maps of their POS software and hardware vendors, uncovering who is investing in EMV technology and who will be ready to support adoption at the merchant level. Huff doesn’t shy away from the fact that to benefit from EMV compliance will demand investment by merchants. “Merchants need to evaluate their overall POS system — workflow, process flow, data capture and send, validation — everything they do today to accept a credit card is going to change.”

Foundational for preparation for EMV transactions is the addition of hardware equipped to read EMV cards and payment processing software capable of processing EMV transactions. “VARs must make sure the hardware is upgraded with an EMV reader. Then they must validate that customer software can ‘catch and pass’ EMV transactions. Those choices should be driven by the VAR,” says Badovinac, who advocates starting the education process now. Suggested resources include EMVCo.com, the Smart Card Alliance (smartcardalliance.org), and the Merchant Advisory Group (merchantadvisorygroup.org). Then, work with vendors to ensure you have the components and software solutions necessary for compliance. Finally, focus on those verticals where EMV will have the biggest impact. “Anywhere that sees international visitors — higher education, hospitality, travel, and entertainment — is already being asked to handle EMV. It’s a matter of global interoperability and a good place to start,” advises Badovinac.

Regardless of whether you agree with the necessity of EMV adoption, the opportunity for solutions providers to provide value by guiding merchants through the EMV maze is ripe, and starts now.