By Scott Schafer, EVP of sales and marketing, Arecont Vision

How might the world of video surveillance have evolved differently if megapixel cameras had been invented before analog cameras? Consider all the image quality compromises we had to accept over the years because of the limitations of analog cameras. We designed thousands upon thousands of video surveillance systems in which the accepted resolution standard of 480 TV lines was the weakest link. 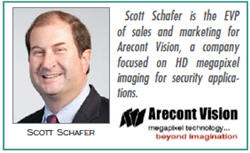 One of the ways we sought to compensate for low resolution and field-of-view limitations was the invention of the PTZ device. “Zoom” was needed because analog cameras couldn’t view objects clearly more than 20 or so feet away, and “pan” and “tilt” were needed to expand coverage for larger areas. Analog cameras (and IP-based network cameras providing similar resolution at 307,200 pixels) yield a specific, limited resolution that is a constant. System designers had to work around that limitation using tools such as mechanical PTZ devices.

The alternative was to add more cameras, which was often cost-prohibitive, especially taking into account both the cost of the cameras and the ancillary costs of installation, recording systems, and the need for additional operations staff to monitor the cameras.

But PTZ devices could never quite compensate for the shortcomings of analog images. For example, what is the likelihood that a PTZ camera will be viewing the exact location within a large area at the exact right time to capture an event? Another aspect of PTZ devices and cameras is maintenance and product dependability. The devices include mechanical components that need maintenance and are subject to failure over time.

The development of high-resolution megapixel cameras resolves the issues that PTZ devices have sought — and often failed — to address over the years. The high-resolution imaging capabilities of megapixel cameras provide significantly improved fields of view with extreme detail. The ability to electronically zoom in to live scenes and recorded video while maintaining high resolution and wide area coverage is simply not possible with conventional analog or IP PTZ (or fixed) cameras. In addition, when using megapixel cameras, there are no mechanical optics components to fail and no directional issues to contend with. Perhaps most important, megapixel cameras provide a much greater value proposition overall for mainstream video surveillance applications.

Today's range of available megapixel cameras can provide images at any resolution, from a million pixels up to 20 million pixels or more. System designers can choose whatever resolution they need for a specific application, and they can use fewer cameras, too. For example, a 3 megapixel camera can replace two to five standard-definition VGA (307,200 pixel) cameras. Panoramic and high-megapixel cameras are a real game changer as they can replace dozens of standard-definition cameras, view large areas, and "see" everything at once, without the need for mechanical panning, tilting, or zooming. Large, clear images can be viewed in real-time or stored and viewed later. Detail permeates the entire field of view, and any specific area can be viewed at any time, clearly, and close-up. Capturing the whole view negates the need for PTZs and the need for personnel to operate them.

And yet, market forces foretell a lingering death for PTZ devices. Some security camera manufacturers still enjoy high levels of sales and profits from older technologies, which can dampen enthusiasm about transitioning or even provide motivation to impede progress. Security resellers may also be hesitant to embrace newer technologies, at least until their customers demand it. The perceived technical challenges of IT/IP systems — networks, servers, storage, and software — can also give old-school resellers pause until they realize that digital deployment is actually simpler than what they have been doing in the past. But once you see a demonstration of the superior image quality, reduced security operations staff, fewer cameras, and cost improvements made possible with new IP megapixel solutions, the picture couldn't be any clearer.

We can't change the history of the video surveillance market, but we can transform its future by fully embracing the superior imaging capabilities of megapixel cameras. Fewer cameras, less labor costs, and better results all contribute to a far superior ROI. And mechanical PTZs will become as passé as slide rules and beepers.