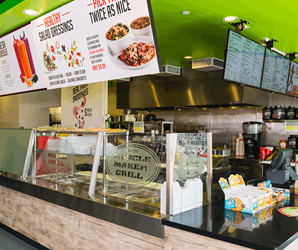 Founded in New Jersey in 1995, Muscle Maker Grill offers customers a nutritious alternative to fast food restaurants. In 2007, the company began to franchise its operations, and now has restaurants across the United States. The restaurants feature a menu that satisfies a wide range of health-conscious diners — from vegetarians to carb-free consumers to people following a gluten-free diet.

Muscle Maker Grill needed a solution to quickly scan orders and receipts at checkout. The company was using in-line scanners and its employees were having difficulty lining up the barcodes on drink bottles.

The company also planned to roll out a digital loyalty program using a smartphone app. They were previously using a paper card punch system, and the cards were easy for customers to lose. In addition, paper-based cards do not provide any insights into customer buying habits.

According to eMarketer, the number of U.S. adults who redeem digital coupons rose nearly 18 percent to 92.6 million in 2015. Smartphones represent the highest growth rate of coupon users. Muscle Maker Grill wanted to capitalize on this trend to better engage with customers.