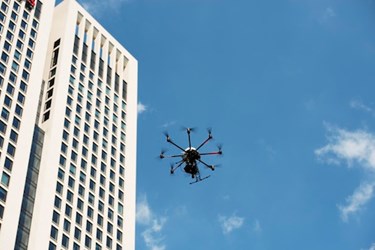 New technology is changing the way security is handled across the private and public sectors.

Like scenes from a sci-fi movie, new technology is transforming today’s security landscape across both the private and public sectors. From surveillance technology to drone patrols — and even fully autonomous security robots — new innovations are driving the way we safeguard assets, people, and infrastructures.

Recently, Sharp announced the release of the Sharp announced the release of INTELLOS Automated Unmanned Ground Vehicle (A-UGV) outdoor security robot, bringing innovation to the security industry. The Sharp INTELLOS A-UGV was launched at the ASIS International Show in Orlando and is described as a “mobile sensor platform that can capture video, audio and environmental data as it patrols assigned areas.”

The new offering can detect, inspect, deter, and report, freeing up security personnel to handle the exceptions from a safe distance. It can also be deployed either as a standalone solution or can be coupled with an existing security team for greater safety and efficiency.

And the Sharp INTELLOS A-UGV is not the only robotic solution on the market today. In June, Gamma 2 Robotics launched a fully autonomous security robot called RAMSEE which also patrols autonomously with no need for supervision and provides real-time data on motion, heat, fire, smoke, gas, intruders, and more.

“We built RAMSEE to be ideally suited for the overnight dull, dirty, and dangerous patrols nobody wants to do. These are the jobs for which the security industry struggles to find staffing,” said chief executive officer Lew Pincus.

While useful in their own right, the value of robots and other mobile sensor platforms increases when integrated with other safety and security assets — such as video surveillance systems, access control systems, building automation systems and others — into command-and-control software for a comprehensive solution for threat detection, assessment and response.

“Mobile sensor platforms, such as robots and drones, have the potential to disrupt public safety and security markets,” said Kalyn Sims, chief technology officer, Hexagon Safety & Infrastructure. “Through our partnership with Gamma 2 Robotics and other efforts, Hexagon is exploring the integration of mobile sensor platforms, command-and-control software, and advanced analytics to enhance public safety and security.”

Drones have also come into increasing use as a security tool, in both the private and public sectors. Abu Dhabi and Gatwick airports were the first to deploy drones for airport or port security, to ensure on-site safety. Gatwick employed “Skyranger” drones, equipped with high-definition cameras that transmit snapshots to officers using portable consoles across the airport. Drone cameras are also being used in Abu Dhabi to assess and monitor accidents, provide information during search and rescue missions, and to gather important information about approaching vessels.

And last year, North Dakota actually became the first state to legalize the use of armed drones by law enforcement. The law limits the type of weapons to “less than lethal” ones including tear gas, rubber bullets, Tasers, and pepper spray.