Current Sales Madness – Why Nobody Gets An Appointment 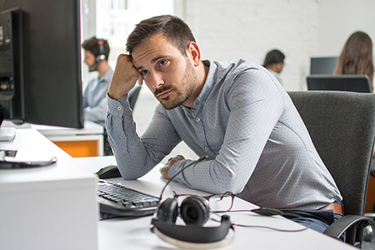 Taking innovative products to market is hard stuff, made more difficult by the overwhelming number of over-VC funded, useless, undifferentiated SaaS offerings clogging up the airwaves and prospects’ phones.

The typical prospect, unlucky enough to be in the DiscoverOrg database, gets scores of cold calls. SPAM emails can be 80% of their traffic.

Incompetent sales managers, trying to make a continually elusive quarterly number, beat sales teams into activity, anything, just get someone to take a call.

But they don’t. Who would?

Imagine, you are a senior professional at a real company. You have a 29-year-old, Starbucks amped-up sales-type calling your cell daily, early in the morning, and leaving a useless voicemail about how he or she can give you the key to digital transformation. This is state-of-the-art.

Cold calling is the ugliest, most intrusive form of selling. Then, the Australians hit our shores to convince those incompetent sales managers that if their reps just engaged with social media, liking a prospect’s post, or wishing them a happy birthday, that would be the ticket.

What did prospects do? Yup, you guessed it. They checked out of social media with the same enthusiasm with which they hide their corporate email and cell number. Anything to stop the sales pests from driving them mad.

We live in a world where sales reps are mosquitos and prospects are looking for digital DDT.

25 years ago, prospects took calls, arranged appointments, and learned from the salesperson about the solution that might fit their needs. But 25 years ago there were not thousands of software firms, hiring armies of cold callers, buying the same lists, driven by quarterly revenue goals who would call, call, call.

The almost universal sales/marketing model in B2B companies is not just broken, it is hopelessly obsolete. It will never recover, get better, or work again.

Smart sellers realize interruption marketing, whether from the Aussies selling social media interruption or the crazies on LinkedIn screaming how to cold call to fame and fortune is done.

People are still buying stuff. Executives need to act now as much as ever. They just do not want to be victimized by the current interruption sales model.

Well, there is an alternative called trusted advisor selling and it works flawlessly. Let’s take an example.

One of our pals has a disruptive technology and needs to get it in front of senior executives and board-level prospects. He cannot sell to the CIO because the offering threatens that empire. The product enables a computer in your hand to replace an entire data center, so you get the picture.

He identified several Fortune 100 firms that would dramatically benefit from this technology. Using traditional sales techniques, he would have emailed, called incessantly, studied the annual report, tried to like a social media post, you know the drill. The result would have been a failure. And a very high cost of sales.

Instead, he found some technology friends of the current, new CEO. He called them about running an idea by them and they were most interested in taking the call. They met several times and agreed the technology would be of great benefit to the prospect firm.

But they went further. They said all the stuff on the website was marketing speak and the company was in danger of losing two of its largest customers. Such a loss, for a public firm, would entail a stock disaster.

They briefed our friend on how, if his technology could impact that issue, not found anywhere in the annual report or on the website, it would be of enormous interest to that firm.

The trusted advisor met with the CEO and briefed him on the new technology. He was not only interested, but he also set up a meeting for a week later, with his exec staff and himself.

Now our friend is in front of the CEO, on a matter of great urgency, with a product that appears to be a perfect fit, for a solution to a problem nowhere to be found on the website or the annual report.

There is a better way.