Why Now Is The Right Time To Sell Cloud Computing

This MSP is turning to the cloud for its projected 30% revenue growth this year.

How Do You Select A BDR Vendor?

Within the past year, MSP Jenaly Technology Group became a stakeholder in a newly formed cloud service provider company, TOGL, which it helped form, along with 16 other MSPs. One of the key services Jenaly sells to its customers — primarily SMBs with fewer than 25 employees — is BDR (backup and disaster recovery). One of the main vendors the MSP uses is Intronis. The MSP rebrands its Intronis solution as VSA (Virtual System Administration) BDR.

When asked why he prefers Intronis’ BDR solution over the myriad of other options, President MJ Shoer said it all came down to two things. “Intronis always takes into consideration its MSPs’ feedback before making any major changes to its product,” he says. “For example, not too long ago they formed a partnership with PSA [professional services automation] vendor ConnectWise. Before integrating their software with the PSA software, they talked to several ConnectWise MSPs to find out the most important features and functions the MSPs wanted. As a result, the integrated software not only does the basics well, such as creating tickets and reporting errors, it also automates processes such as creating invoices and incorporating the proper pricing information from each application, which saves a lot of time.”

The second reason Jenaly Technology Group likes working with Intronis is its tech support responsiveness. “We had a tech who was performing an Exchange server upgrade and integrating the server with Intronis’ BDR software for the first time,” recalls Shoer. “He was pleasantly surprised to find that in one call, he was able to get in touch with a knowledgeable person, he got all his questions answered, and the integration worked very smoothly. His experience working with other vendors in the past was that integration projects like this one would require multiple calls and there would be numerous glitches that would have to be ironed out over the course of a few days.” 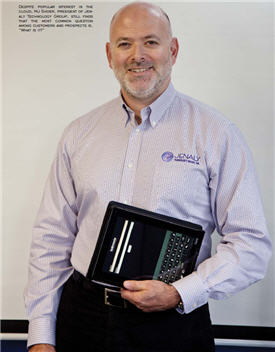 I was surprised when I first discovered that Jenaly Technology Group (pronounced ‘jen-uh-lee’) is comprised of just eight people. Besides doing an exceptional job of building his name recognition and expertise in the Portsmouth, NH area, MJ Shoer (pronounced ‘Shore’), president of Jenaly Technology Group, knows how to make good use of his myriad of business connections. In the past, he’s leveraged his relationship with an executive at the ASCII Group, for example, to help him get in touch with a hard-to-reach contact at Microsoft. He talks with members of his TBG (Taylor Business Group) and Robin Robins peer groups almost daily. These allies have been helpful sounding boards when he’s needed to make difficult decisions, such as terminating an employee. He’s even used his peer group relationships to assist with implementations that are outside his company’s expertise.

Last year, during one of his quarterly Robin Robins Producers Club meetings, an impassioned conversation on the topic of cloud computing broke out among the 17 members in Shoer’s group. The discussion led to a significant change in Jenaly Technology Group’s (and the other business partners’) businesses, which is playing a key role in the MSP’s growth.

Why You Should Consider Building A Cloud Service Solution
The date was July 2011. MJ Shoer and 16 other business owners were gathered for their quarterly Robin Robins Producers Club meeting. “Everyone had some complaint or reservation about selling cloud services,” he recalls. “Some MSPs were concerned about security and others believed that reselling someone else’s cloud services just wasn’t profitable.” Before long, one of the members brought up the idea of pooling all their resources and building their own cloud service offering. As each member talked through the potential benefits, they all decided this was a great idea, and the rest of the discussion focused on the logistics of how they could pull this off.

Within a few weeks, the concept for TOGL (toglcloud.com) was born. Each of the 17 companies made a financial investment in the new company. To fairly reward those who were able to make larger investments, the group divided the company into multiple stock classes and assigned them to each of the founding members according to their investment level. “To streamline the start-up process, we formed small teams that were responsible for each aspect of the project and asked each member to participate wherever they thought they could provide the most value to the business,” recalls Shoer. “For example, we created an infrastructure team that was responsible for purchasing the hardware and software for the data center. We also created a technical support team and a management team.”

Rather than build its own data center from scratch, the TOGL members found an existing data center where they could lease space. “This sped up the process significantly because we didn’t have to worry about the access control, power, cooling, and redundancy issues that go into building a data center,” says Shoer. After locating a data center and selecting the servers (they use HP and Dell) and platform (they use OS33), the infrastructure team spent the majority of its time testing and fine-tuning equipment. “There were a few short delays at one point setting up the SAN [storage area network],” recalls Shoer. “The tsunami that hit Thailand last year wiped out a major hard drive manufacturer’s facility, causing a temporary shortage of server hard drives.” Within five weeks, however, the setup was complete, and TOGL was ready for business.

Jenaly Technology Group and each of the MSPs in its peer group, which are geographically distant from one another (which avoids intergroup competition), have a share in TOGL and can offer clients private cloud services. “By using Kasaya RMM [remote monitoring and management] software, we’re able to manage the majority of the cloud data center without having to be on-site,” he says.

You’re A Cloud Service Provider. Now What?
Since going live with the TOGL cloud data center in January 2012, Shoer has been marketing this new offering as part of his quarterly lunch and learn sessions. His most recent session, which he hosted at a local hotel banquet room near his headquarters, was filled to capacity weeks ahead of schedule, and he even had to turn people away. “Just about everyone I talk to is interested in the cloud,” he says. “The most common question customers and prospects have about the cloud is, ‘What is it?’” Once prospects understand the basics about the cloud, Shoer has found there are a few messages that resonate best with most companies:

Green Computing — Whether companies are genuinely concerned about leaving a smaller footprint on the environment or they’re looking for ways to cut their electric bill, cloud computing is a way to achieve that goal.

Business Continuity — With natural disasters like the EF5 (the highest category) tornado that tore through Joplin, MO last year, more companies now realize that having an on-site backup of their data isn’t good enough. The off-site nature of the cloud is playing a growing role in disaster recovery.

Virtual Computing — As businesses become more comfortable with moving their data to the cloud, other services such as desktop virtualization come next. This model replaces the traditional client/server computing model with a browser-based computing experience, enabling the end user to reduce its server and computer costs. “The other advantage is that this computing model makes it easier for businesses to be more device agnostic because PCs, Macs, Android, and iOS devices all take on a common interface and user experience,” says Shoer.

The Cloud’s Not For All Your Customers
Selling cloud solutions isn’t without its challenges, however. Shoer is quick to point out that not every customer is a good fit for the cloud, and it’s no small task to find out which are and which aren’t. Even with the aid of network assessment tools, Shoer says he spends up to 20 hours on an assessment — even for a company with 20 employees. “You need to talk with all the key stakeholders and find out about all the applications they’re using, what kind of bandwidth is required, how many licenses they need, and how their business processes work,” he says. “Just a few months ago, we did an assessment with a customer that had a lot of highly customized applications, and we determined that the three-year ROI for moving to the cloud just wasn’t feasible.” For existing customers that are already on an all-inclusive flat fee managed services plan with Jenaly Technology Group, Shoer says he doesn’t charge for the assessment, but for a new prospect, the charge ranges from $1,500 to $3,000. If the prospect turns into a customer, the assessment fee is rolled into the managed services agreement.

One other area that MSPs need to consider is their customers’ accounting structures. Some companies operate on a CapEx (capital expenditure) model, which places large purchases on their balance sheets that get depreciated over time. A cloud services offering, on the other hand, is considered an OpEx (operating expenditure), which shows up on a business’ P&L (profit and loss) and is expensed monthly, as incurred.

One final piece of advice Shoer offers MSPs that want to sell cloud services is to be aware of how the consumer IT mind-set complicates the cloud business model. “Many people think that because they can share photos and documents for free with their friends using Drop- Box, Flickr, or Facebook, things should work similarly for their businesses,” he says. “What they fail to realize is that in the workplace, access controls need to be in place. If an engineer posts a sensitive drawing to an unsecured online sharing service, for instance, and that information gets compromised, there can be legal ramifications and other negative impacts to the business. You need to be prepared to explain this difference when confronted with this objection and demonstrate the value of a solution that is optimized for the workplace.”

Why The Cloud Investment Was Worth It
By the end of the year, Shoer projects that 20% of his revenue will come from new cloud services running in the TOGL cloud data center. The biggest challenge that could keep him from reaching this goal comes from customers’ misperceptions with giving up control of their data and business processes. “The fact that I’m now a stakeholder in a cloud services company makes me feel better about guaranteeing my customers that their data will be protected and always available,” he says.